There is a natural tension in everything. The forces of chaos and order are locked in a constant battle that lies at the heart of creation. We are surfing a wave at the interface of order and chaos.

The biological world provides a perfect example of this tension between order and chaos. If there were no order, life could not exist. The complex systems of chemicals, proteins, cells, organs and organisms that are life could not persist if our reality was too disordered. On the other hand, life would also be impossible if not for the some force of chaotic change pushing the world forward.

It is an interesting aside to consider what kind of life could potentially evolve (or perhaps be created) in such extreme conditions. Collections of self-aware plasma on the surface of a star; highly dense ice based creatures sluggishly evolving in the outer reaches of the solar system. Notwithstanding such fanciful notions however, the appearance of life seems to be restricted to a narrow ‘Goldilocks zone’ between order and chaos. We require a liquid cradle – one which is neither too hot nor too cold.

Still, even if a system does find itself with an appropriate balance of order and chaos which favours the emergence of self-replicating matter (aka Life) the question remains as to why such a system should produce complexity? Given that organisms which reproduce most efficiently would have a significant evolutionary edge, should the system not tend towards a simple, uniform state? Why are we not taken over by some naturally occurring form of grey-goo?

The simple answer is that a uniform population lacks the ability to respond to natural environmental changes. Take for example a bowl of soup containing a population of bacteria. Let’s say the bacteria are perfectly suited to feeding on one of the nutrients in the soup. These bacteria will continue to feed on the soup, multiplying and growing until they totally consume said favourite nutrient. At this point, a population of bacteria that is totally uniform would be unable to adapt and start feeding on different nutrients. However, if there is some chaotic variation in the population, then some of the bacteria might have some ability to start eating other nutrients.  If change from one nutrient epoch to the next is slow enough, then the bacteria with an ability to digest alternative nutrients can be selected for survival.

Fascinatingly, research has shown that biological organisms have even evolved the ability to tune their rate of evolution based on how well suited they are to their environment. If an organism is experiencing chronic stress, then it is a sign that it is poorly adapted to its environment. Through a number of recently discovered genetic mechanisms, stressed organisms can increase their rate of mutation in hopes that they can become better adapted to their environment. This type of effect has now been well documented in bacteria, plants and even insects. Thus, biological chaos is able to ramp up if an organism is unsuited to a particular environmental change.

In this way, biological systems have harnessed a chaotic process (mutation) to apply order to the chaotic natural world. Through iterative cycles of selection, biology has driven the evolution of all the wonderful forms of life we see around us. Biology “learns to understand” the world by continuously testing out randomly generated organisms for their adaptation to it.

Biological change is beautiful, but it is also subject to important limitations. Firstly, when viewed from the context of a human lifetime it occurs at an almost imperceptibly slow pace, over the course of generations. Take the soup of bacteria we referred to earlier and heat it up 20 or 30 degrees and you will kill all of the bacteria inside. You would need to heat the soup over weeks or months to even have a chance to allow the bacteria to evolve resistance to heat and hope for any survival.  Even more importantly, the potentiality of a biological system is also fundamentally limited by its nature. Biological systems can only accomplish what is inherently possible using the tools of DNA, RNA, protein and lipids.

From biology a new evolutionary paradigm of chaos and order has now emerged – that of ideas. Random shifting and mixing of ideas within and between individuals creates a chaotically varying population.  As Matt Ridley puts it, ideas can have sex. From this population of randomly generated ideas, ideas must compete for the limited resources of human brains. Just as a virus must jump from person to person to survive, ideas must also cross the gaps between us.

We are infected with thoughts.

Also just like biological systems, our ideas seem to respond to how well adapted they are to their respective environment, our minds. An idea which does not resonate with us will be subject to manipulation and modification. Ideas will mutate to fit into our understanding of the world, and we spit them back out to see how this newly modified idea will resonate in the minds of others.

Similarly to biological systems it seems possible that our mind mutates ideas to make them resonate with our world view.

In this new paradigm, a bewildering landscape of ideas is driving our man-made world forward ever faster. A new tension of chaos and order has been established in the world of ideas, and unlike biology, the potentiality of ideas seems not to be restricted by the limitations of reality. But, as we look forwards at an age where ideas may soon leave biology behind completely, an imponderable question does creep into mind. Will we one day reach the end of what is possible with ideas?

So I have been thinking a little bit deeper about the relationship of systems of chaos. I am not sure about this part, but I wonder if in order for one chaotic system to harness another, whether it must have a wider ‘spectrum of potentiality’ then its underlying system. For example, for biological systems to harness or ‘understand’ a chaotic chemical system the possible permutations of biology must supersede what is possible within the simple chemical world (ie lacking biomolecules). In following, perhaps the spectrum of potentiality of the ideas within the mind must be wider then that of the biological world for us to be able to understand biology. Finally, a new paradigm may be emerging from electronic life wherein the spectrum of potentiality within the human mind will be inadequate to grasp the ‘post-ideas’ it will create. 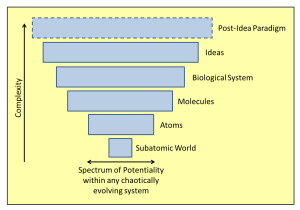 I can’t be sure if I am talking gibberish at this point but what really blows my mind, is that each of these ‘spectrums of potentiality’ may actually be infinite, they are just different sized infinities.

9 thoughts on “Hierarchies of Chaos and Order”