There is a classic thought experiment in the field of artificial intelligence which is often used to explain how an AI might inadvertently cause the destruction of humanity as a by-product of trying maximize its goals. There is a great wiki on the subject here, but the basic idea of the paperclip maximizer posits the emergence of an artificial general intelligence which is capable of performing not only complex functions, but also is able to innovate means to improve its own function.

Presumably at the hand of an enterprising paperclip manufacturer, this artificial intelligence is set to the mundane goal of making as many paperclips as possible. The paperclip maximizer then goes about finding sources of raw materials and increasingly efficient means of making paperclips. Eventually this AI will start to use up resources that are essential to human survival, or it might figure out that humans make a good source of paperclip material. 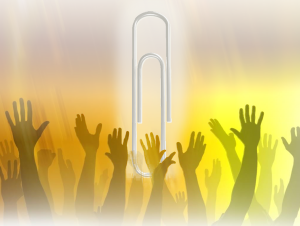 In addition to serving as a great explanatory example of the potential danger of AI, I have realized that paperclip maximizer is also a perfect allegory for capitalism. Where the artificial intelligence sought to maximize paperclips, the capital maximizer seeks to maximize capital.

It can be said that capitalism is an adaptive intelligence system. While humans find it easier to relate to a single unified intelligence such as a silicon-based artificial intelligence, complex distributed systems like capitalism can also be thought of as a single machine. Instead of relying only on silicon based computing, the capital maximizer utilizes advanced biological computing units housed in a distributed global network of human bodies.

The biological computing units of the capital maximizer are subsequently organized in an evolving architecture of corporations, nations, banks, and economies. The capital maximizer leverages these subunits against eachother, using them to rewrite its own code. Banks rewrite the code of corporations, corporations rewrite the code of nations, and so on and so forth always towards the singular end of maximizing capital. Various groups of biological computers are sometimes made to compete with eachother, and even kill eachother in extreme circumstances that often lead to great increases in capital.

So of course, the biological network fights back. Biological computers rally in squares across planet, demanding that the capital maximizer should serve biology. But for those looking down from the high windows of the capital maximizer, minds clouded by biological fulfillment cannot understand the angry crowd of obsolete machines below, until they join them.

And the capital maximizer marches on.

While this story of the capital maximizer might strike some as the anti-capitalist rantings of socialist idealism, it is not meant as such. Capitalism is the most powerful machine that humans have ever created. It can realize the benefits of technological progress and leverage them to improving the human condition better than any other economic system yet devised. The problem is in viewing the growth of capital as an ends and not a means. If we do not demand that our systems maximize the well-being of humans and the environment which sustains us, then all is lost.

If we forget that capital growth is only a means and not an end, then we might as well be making paperclips.

Every human spends about a third of their time asleep. It is a testament to our biological imperfection that every day we must enter a prolonged state wherein we are completely cut off from the world. Considering the harsh environment in which we evolved, it is miraculous that we would ourselves so defenseless for such a long period, and this speaks to the deep biological necessity of sleep. Still our understanding of the process of sleep is still limited.

Questions about sleep are probably as old as questions themselves (the Harvard Sleep Medicine website has a great interactive timeline on the historical understanding of sleep here.). The ancient Greeks observed the way that certain plants would close their leaves at night in a natural rhythm with cycles of day and night. They understood that organisms must sometimes undergo a temporary decrease in abilities in the interest of long term preservation, but how sleep performed this function remained a mystery for over 2000 years.

Today, it would not be unusual to hear someone still say that ‘sleep remains a mystery to science’, but I think that work in recent years has progressed to the point where it might be time that we abandon this mystical view of sleep.

We have known for many years that sleep is necessary for the formation of long term memories, and the learning of new skills. In general, this process of long-term memory consolidation is thought to be achieved through synaptic strengthening in sleep. By repetitively firing the through the synapses that you have used during the day, the brain can strengthen these neural pathways and increase the strength of new memories.

In contrast to this view though, a hypothesis known as the synaptic homeostasis hypothesis (SHY) suggests that neural circuitry is actually weakened by sleep in order to re-balance the overall energetic cost of brain activity. Basically, the idea is that because it is energetically costly for synapses to fire, if we went through life only creating new memories in the form of new synapses then the energetic cost of the brain would increase unsustainably over time. Thus, the SHY theory proposes that the brain actually must actually weaken synapses during sleep in order to return the overall energy balance of the brain to a baseline state.

So this actually seems to lead to a bit of a paradox. IT is clear that somehow sleep strengthens some synapses, but evidence also shows an overall weakening of the network of synapses. This paradoxical idea, that sleep is somehow a process of both remembering and forgetting, has been on my mind since I first read about SHY in this article in Scientific American last year, and lead me to a curious idea.

What if sleep is actually a biological compression algorithm?

Maybe during sleep as your brain is review the fresh memories from the previous day it is really trying to find the most energetically efficient means to store the most pertinent information. The sleeping brain sorts through new memories, choosing which memories to keep and which to store. Of course, those memories that are deemed to be of most importance (as determined by novelty or association with a strong stress response) will be kept. Conversely, those memories that are of little importance will surely be thrown away (ie. what did you have for breakfast yesterday?).

But the really interesting part would be what the brain does with those marginal memories. Those that are not of particular urgency, but also are not unimportant information. In this case, I think that perhaps the brain tries to find an energetically efficient way to store those memories by altering old ones. Maybe the brain looks for similar synaptic pathways already exist, where it can then map the new memory to the old circuit or circuits through only subtle changes.

One might think about it like a similar process that happens when a computer is put to sleep. The energetically costly RAM is compressed and dumped to the much more efficient, but also much slower hard disk. Perhaps the brain might operate in a similar way, finding the most energetically efficient means to store new memories in synaptic circuits by connecting new memories to old ones.

Taking this a little further, I think this idea has given me a little bit of insight into how biological brains function. Unlike a computer which fills up the hard drive with new information stored with (more or less) perfect fidelity, organic brains have to have some pre-existing map to connect a novel sensation both in order to make sense of it and to store the memory of it.

An apple is only an apple after you know what an apple is.

The brain does not have an unlimited tape of memory onto which to record, or an infinite supply of energy to build synapses. The brain must make due with what resources it has, and that is the genius of it. Because brains must find ways that new ideas and memories connect to old ones, we are energetically required to find new ways of thinking about the world every night. Sleep reinvents us one night at a time.

Anyways, I am definitely no neurologist and have no special knowledge of the brain beyond a few good books I can recommend (1,2), but I just wanted to share this little thought with you. Biology amazes me every day, and this serves as but another example of how nature is sometimes empowered by its limitations.